The Professor has announced his latest heist, Plan Bermuda, enlisting the help of Free Fire players to join.

Garena has teamed up with Netflix for a crossover between Money Heist (also known as La Casa de Papel) and Free Fire that fans of both the game and series can experience for themselves. Plan Bermuda will feature a full in-game takeover, as the crossover brings new ways for players to enjoy Free Fire.

“Creating memorable experiences for our Free Fire community is key, and there are few better ways than to do so by teaming up with one of the most popular Netflix series, Money Heist,“ said Harold Teo, Producer, Garena. “Many of us at Garena are fans of the show, and so are millions of our players worldwide. We are thrilled that we can deliver this crossover to our community. We hope they enjoy it as much as we did bringing this together.”

“Part of the Plan Bermuda update will be the launch of the new 4v4 game mode, Plan Bermuda”

In the new game mode Plan Bermuda, players race against the opposing team to collect the most banknotes before the time runs out. Players will need to activate in-game printing presses, Money Printer, which will be situated in set locations across the map. Players will activate the Money Printer by occupying and defending the surrounding area. The printing press will then print banknotes for the defending team to collect. The first team to reach the target amount of banknotes in the allotted time wins.

Players will see “La Casa de Papel” themes throughout the game including the Money Printer and Safe in Spawn Island, and even when dropping into matches in Plan Bermuda Parachutes and airplanes.

“Deck your character out with the exclusive La Casa de Papel x Free Fire collection”Players will be able to experience Plan Bermuda and enjoy the crossover event from the moment they start the game until they engage in battle in their exclusive heist suits. The crossover will bring an entire collection of classic outfits inspired by the series itself – Plan Bermuda style with the red jumpsuits and iconic mask – and more. 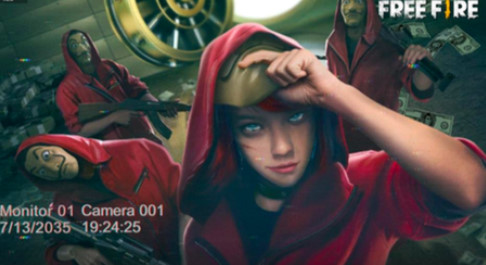 Garena is the leading games developer and publisher in Southeast Asia, Taiwan, Latin America, India, and has expanded into other fast-growing markets globally. Free Fire can be downloaded for free on both the Apple iOS App and Google Play store from the following links.